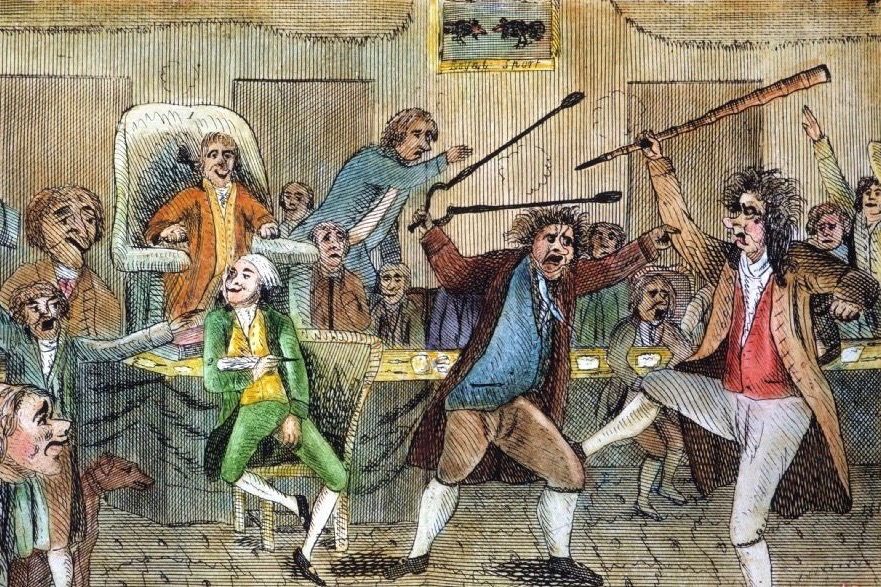 As Americans go to the polls to vote in today’s midterm Congressional elections, they will be able to watch results flow practically in real time. By the end of the day, the data for the election returns will be more or less available. For much of United States history, of course, information flowed more slowly. But even still, we can take it for granted that there are regular records of elections, and that it is straightforward to find out who won.

Not so for the period before 1825. Before that date, there was no federal mandate that state election officials report the results of elections in an official way. As a result, there simply is not a comprehensive record of Congressional elections during the formative era of the early republic and the first party system.

At least, there wasn’t, until Philip Lampi made it his life work to create that archive. Born in 1944, Lampi had no formal historical training outside of high school. But Working for decades, Lampi painstakingly re-created the election returns from 1789 to 1825 by scouring newspapers, local history collections, and every possible archive. His recreation of the election returns for the early republic was, perhaps, the single greatest act of historical recovery for U.S. history.

His story is told in an 2008 article from Humanities magazine:

[Lampi] stumbled upon his first set of election returns in the 1959 World Almanac.

Lampi, blinking through glasses that make his eyes look huge, says those election returns “were arranged in a very strange fashion.” So he took it upon himself to reorganize them by state and fill in gaps with other sources, a project that absorbed him for the rest of high school. Lampi was left to his own devices in the library for days at a time: “I didn’t have anyone looking over my shoulder. If I’d had parents they probably would have discouraged it.”

As his interest in election returns grew, Lampi noticed that all of the data stopped at 1825. He decided to find the missing facts and figures. The first set he uncovered was in the early Boston paper the Columbia Centinel. He copied them out by hand. And so began a lifelong quest, with Lampi crisscrossing the nation in search of state archives, historical societies, newspaper collections, compendia of letters, and biographies holding records of how Americans voted when the Constitution was still young.

What did it take to gather that the election data?

To hunt down this elusive data, Lampi made many sacrifices. He lived in his car, on and off, from 1973 to 1988. He recounts a time when he spent the night in the back parking lot of the Georgia Historical Society in order to hit the archives first thing in the morning. He made an effort to stay at a motel every third or fourth night, “just to take a shower,” and on Saturdays, when no libraries would be open the next day for research. He ate a lot of peanut butter and jelly in those days, or “anything that was portable.” He caught odd jobs and small grants when he could. During one period, he worked as a night watchman at his old school, typing in the two-hour windows between his rounds. And he did all this without a college degree.

For this act of historical recovery, Lampi received an honorary doctorate from Tufts University, and he was awarded the very first Chairman’s Commendation from the National Endowment for the Humanities.

Lampi, in collaboration with other scholars, also received a series of grants to create a comprehensive database of the election records he had gathered. The result was A New Nation Votes: American Election Returns, 1787–1825. Created in partnership with the American Antiquarian Society and Tufts University, that project allows researchers and citizens to find the election returns for state, local, and Congressional elections across the early republic.

The next step for Lampi’s election data was to create maps of Congressional elections like those people pore over on Election Day, but for the first decades of the United States. In 2019, a team of historians at the Roy Rosenzweig Center for History and New Media, working with Lampi and other scholars at the American Antiquarian Society, created Mapping Early American Elections. The site offers as comprehensive a set of maps of Congressional elections as it is possible to make for the early republic. Here, for example, are the results for the highly contested election of 1800, in which Federalists faced off against Democratic-Republicans. (You can also read more about the 1800 election in this New Yorker essay, which also profiles Lampi.) The project includes the maps, of course, but also tables of election results and data which you can download for yourself.

After you go to the polls, you might consider reading some of the essays that show how the American political system developed, and gain some historical perspective on our current elections. Rosemarie Zagarri writes about the rough and tumble of the first party system at a time when the legitimacy of political parties as an institution was not well defined. Philip Lampi writes about how elections actually happened, in a very different process than the orderly voting by district that is the norm today. Jordan Bratt tackles the problem of incumbency: what does it mean for a democracy if the same people keep getting elected? Greta Swain takes up the question of region and geography. And Andrew Robertson discusses voter turnout, demonstrating that voter participation in the early republic was extraordinarily high among eligible voters, though suffrage laws and enslavement systematically excluded most Americans from the francise. Together the essays comprise a brief, accessible introduction to the foundational era of American politics, with maps and data to chart what political historian Andrew Robertson has called “the tortuous trajectory of American democracy.”